Learn how transient vibrational modes of ligands are being used to reveal new opportunities to enhance the activity and durability of nanocrystals in photocatalytic reactions using the inspIReTM.

ABSTRACT: Ligands on the surfaces of colloidal quantum dots (QDs) have dual and often competing roles in photocatalytic transformations. They mediate the energy and electron transfer processes that underpin photocatalysis, which is enhanced by an open, dynamic ligand shell. But, they also provide colloidal stability and protection from photodegradation, which are improved by a dense, static ligand shell. Recent experimental advances from Magnitude Instruments make it possible to examine changes of ligand bonding in the excited states of QDs and to correlate those changes with their underlying surface chemistry to enhance the activity and durability of nanocrystals in photocatalytic reactions.

The ligand-nanocrystal boundaries of colloidal QDs mediate the primary energy and electron transfer processes that underpin photochemical and photocatalytic transformations at their surfaces. For example, the balance of forward and back charge transfer processes that determine quantum yields of many photocatalytic reactions are influenced by the ability of redox shuttles and molecular cocatalysts to transiently approach nanocrystal surfaces within their excited state lifetimes and then to diffuse away following the charge transfer process to prevent recombination and to forward the catalytic process. Such surface interaction and escape dynamics can be modulated by the permeability of the nanocrystals’ ligand shells, which in turn influences their colloidal stability and chemical resistance to degradation. These examples emphasize the dual and often competing roles of ligands on nanocrystal surfaces.

Historically, few techniques have been available to characterize the structure and dynamics of the nanocrystal/ligand/solvent boundary in the excited states of nanocrystals. Fortunately, recent advances in mid-IR transient absorption (TA) spectroscopy have enabled studies of the changes in surface chemistry at this boundary by probing ligand vibrational features in the excited states of the nanocrystals.1-2 Transient vibrational spectra appearing in Figure 1A were measured in PbS QD films using an inspIReTM mid-IR TA spectrometer 20 ns after 532 nm excitation with 2 μJ/cm2 intensity.1 The transient vibrational spectra revealed vibrational features of oleate ligands attached to the PbS QD surfaces in their excitonic excited states and indicated an overall decrease of the Pb-O coordination in the QD excited states. These studies revealed that certain types of ligands exhibit weaker surface bonding when their nanocrystals are excited to excitonic states. Such dynamic changes of excited state surface chemistry may increase the surface mobility of ligands and enhance the ability of molecular species to penetrate the ligand shell to undergo energy and charge transfer processes for more active photocatalytic reactions. 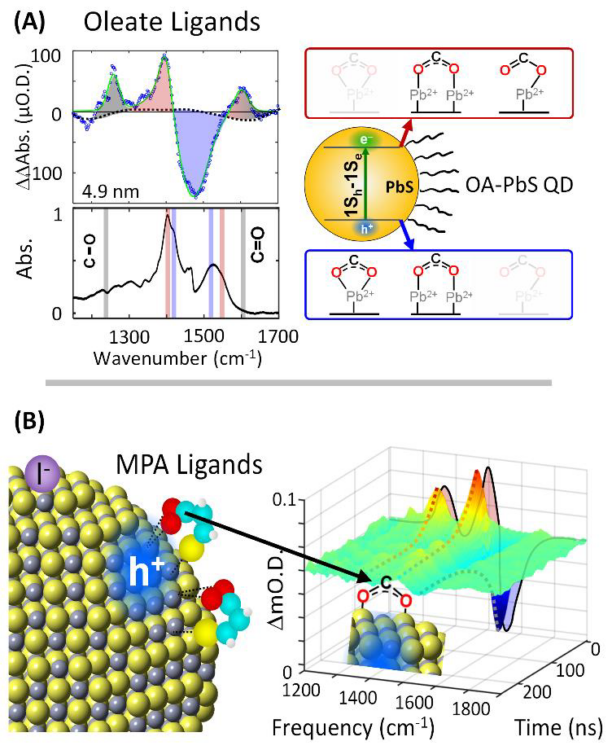 Figure 1. Summary of the excited surface chemistries of oleate passivated and MPA passivated PbS QD films obtained from measurements of the transient vibrational spectra of carboxylic groups bonded to PbS QD surfaces following 532 nm excitation. A. The transient vibrational spectra of oleate passivated QDs reveal a net weakening of ligand bonding in the excited states of the nanocrystals due to enhancement of electron surface density. B. In contrast, the localization of hole density at QD surfaces near MPA ligands arises from interactions with the thiol groups of the ligands. The change in positive surface charge density at the QD surfaces causes a uniform frequency shift of the carboxylate vibrational features. Adapted with permission from J. Phys. Chem. C 2021, 125, 22622–22629 and from J. Am. Chem. Soc. 2021, 143, 13824-13834. Copyright (2021) American Chemical Society.

Furthermore, a recent paper published in J. Am. Chem. Soc. in 2021 revealed that the changes of ligand bonding in the excited states of PbS QDs depends on their surface chemistry and ligand structure.2 The transient vibrational spectra appearing in Figure 1B were measured in PbS QDs passivated by 3-mercaptoproprionic acid (MPA) possessing both thiol and carboxylate anchoring groups that bond to the nanocrystal surfaces. The ability to measure two-dimensional TA data in both frequency and time using the inspIReTM mid-IR TA spectrometer revealed distinct transient vibrational features in the MPA passivated PbS QD films in comparison to the oleate passivated nanocrystals. The transient vibrational features of the carboxylate groups of MPA ligands indicated a uniform frequency shift arising from changes of the surface charge density near MPA ligands at the nanocrystal surfaces. Such changes in surface charge density are known to occur because the thiol groups of MPA ligands tend to localize holes at PbS QD surfaces. This ability to correlate the influence that QD surface chemistry and ligand structure have on changes of ligand bonding in the excited states of the nanocrystals opens new opportunities to explore how the nanocrystal/ligand boundary can be understood and controlled to enhance the activity and durability of colloidal QDs for photocatalytic applications.